VMware have clearly laid out plans for the complete convergence of the IT infrastructure, as seen with the release of NSX and VSAN at VMworld 2013. I’ve highlighted some important features of VMware’s new storage solution ‘VSAN’.

VMware VSAN is fully integrated with VMware vSphere automatically aggregating local host storage in a cluster so that it can be presented as block level shared storage for virtual machines. It’s function is to provide both HA (High Availability) and scale-out-storage features.

This is leaps ahead of the VMware VSA (Virtual Storage Appliance) aimed at the SMB with 2-3 hosts released in 2011.

Here is a quick reminder of some of the strict requirements & limitations we had with the VSA.

Note: beta version will have an 8 host limit, this figure will be adjusted when it’s GA.

As with any storage solution understanding your IOPs requirement is paramount, and to effectively achieve the necessary IOPs for the solution you need to understand what your workloads are. vSphere VSAN supports SSDs which act as read and write cache for I/O this significantly improves performance, although we are yet to see any real world numbers.

SSD based Read Caching on the VSAN:

This is a cache of locally accessed disk blocks for virtual machines, specifically these are blocks used by the application running on the virtual machine. The virtual machine might not be on the same host the controller uses to communicate with the SSD. vSphere VSAN mirrors a directory of cached blocks between hosts in a VSAN cluster, if the virtual machine is utilising cache not local to the vSphere host, the interconnect (VMKernel port) is used to retrieve cached blocks from the host SSD that does hold the information. Hence why VMware recommend using 10Gb CNA’s to reduce latency.

Note: If the required disks blocks are not in cache on any of the hosts the information is retrieved directly from the backing HDD’s.

SSD Write Caching on the VSAN:

Note: Write operations must be committed to SSD on hosts before it is acknowledged and committed to the HDD’s

In the past when defining HA admission control policies we defined enforcement policies as (a) ‘Host Failures the Cluster tolerates’, (b) ‘Percentage of cluster resources reserved…’  and (c) ‘Specify failover hosts’. vSphere administrators can now define how many host, network or disk failures a virtual machine can tolerate in a VSAN cluster.

Number of Disks Stripes per Object – This defines the number of physical disks across which each replica of a storage object is distributed. A value higher than 1 might result in better performance if read caching is not effective, but it will also result in a greater use of system resources. VMware state that a default disk stripe number of 1 should meet the requirements of most if not all virtual machine workloads. VMware recommend that the disk striping value should change only when a small number of high-performance virtual machines are running.

Flash Read Cache Reservation  – The amount of flash reserved as read cache for the storage object. This is specified as a percentage of the logical size of the virtual machine disk storage object. If cache reservation is not defined the VSAN scheduler manages ‘fair’ cache allocation.

Note: VMware state that if you provision a virtual machine and select disk format to be either thick lazy or eager zeroed this setting overrides the ObjectSpaceReservation setting in the virtual machine storage policy.

Force provisioning (disabled by default) – This is an override to forcibly provision an object even if the capabilities in the virtual machine storage policy cannot be satisfied .VSAN will attempt to bring that object into compliance if and when resources become available.

Here is the whitepaper released by VMware : VMware_Virtual_SAN_Whats_New.pdf

I’m looking forward to revisiting this post after the public beta is released with some more information on how it works.

You can register for the beta here : http://www.vmware.com/vsan-beta-register 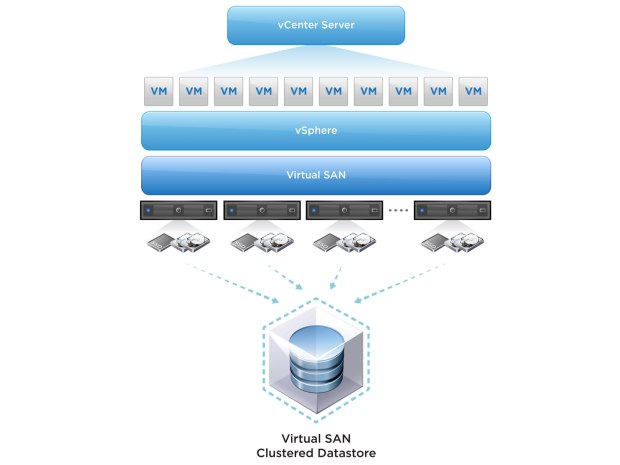 Any views or opinions expressed here are strictly my own. I am solely responsible for all content published here. This is a personal blog, not a company blog. Content published here is not read, reviewed, or approved in advance by my employer and does not necessarily represent or reflect the views or opinions of my employer or any of its divisions, subsidiaries, or business partners.